We are a group of residents within the valley who’s mission is to memorialize the transformative legacy of Reverend Dr. Martin Luther King Jr. and to inspire the Valley communities with love, equity, justice, and compassion for all Valley residents. The vision is that the dreams and convictions of Dr. King perpetually resonate throughout all the behaviors, actions, and systems in our Valley region’s work as we strive to address community wellbeing & quality of life for all. Over the last 2 years, the MLK Unity in the Community Committee proudly completed the prominently displayed (one of its kind & largest in Connecticut) MLK Bust on Main Street in front of Ansonia City Hall, and conducted a series of panelist events with interactive Q & A opportunities focused on race, public safety, policing, and community trust – panelists have included a local Valley Chief of Police & law enforcement, leaders in youth & faith, and members of both the Valley NAACP and the MLK Unity in the Community Committee. 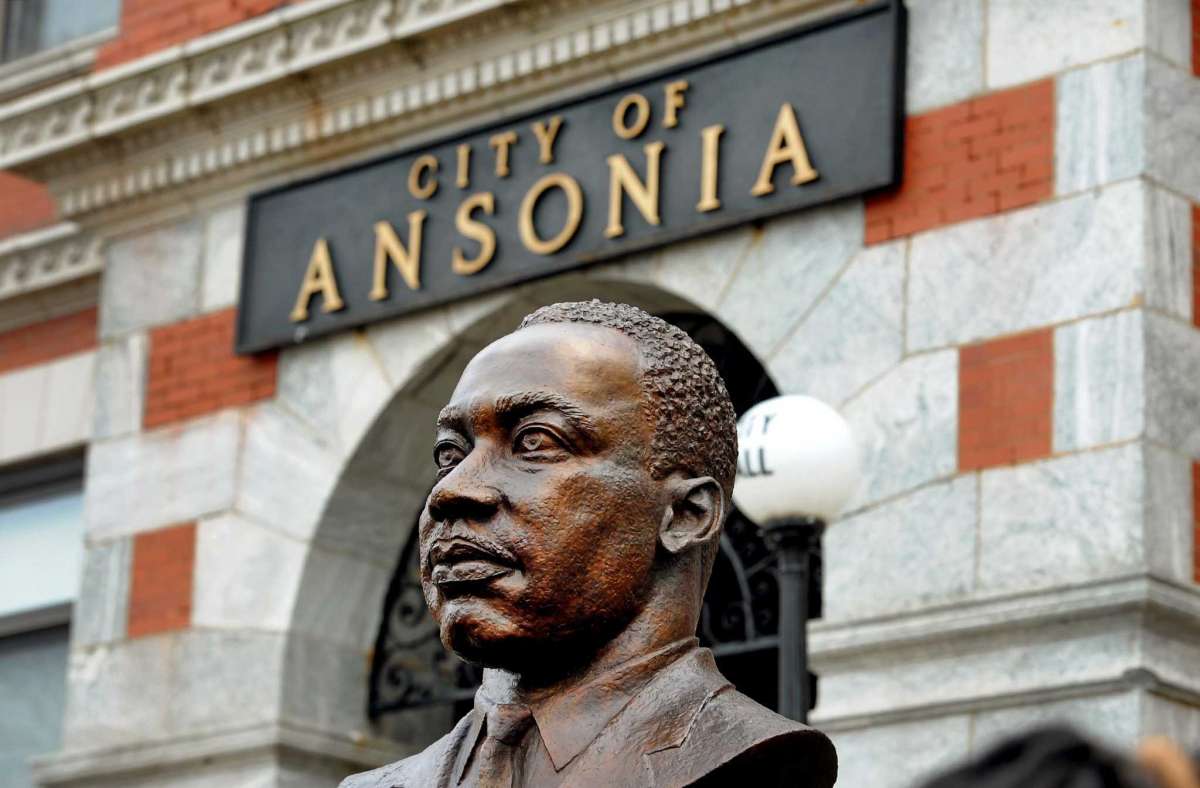 The Valley MLK Committee is working with the City of Derby and the community at-large in order to prominently paint an MLK mural on a permanent building structure that will inspire Derby and the surrounding Valley communities with equity, justice, and opportunity for all Valley residents. As an inspirational and historic Civil Rights leader against all manner of racial, social, and economic injustices, a mural featuring Reverend Dr. Martin Luther King, Jr and what he stood for is an opportunity to work with our neighborhoods & leaders in achieving the mission of the MLK Committee. Professional artists with local Valley youth apprentices will complete the work.

Our goal is to unveil the mural at a prominent location in Derby in 2022 . The MLK Committee is identifying a final site and will be fundraising to complete the mural project.

TEAM is the backbone fiscal agency for the MLK Committee – 100% of donations go toward the completion of the mural. Those wishing to donate (“TEAM” care of MLK Mural) or be meaningfully involved can contact Maliqa Mosley-Williams (Chair – Valley MLK Committee) or David Morgan (President/CEO – TEAM).

Click the news links above to read about the progress of our project. If you are compelled to contribute, please click the donate button below! 100% of proceeds go to the mural. 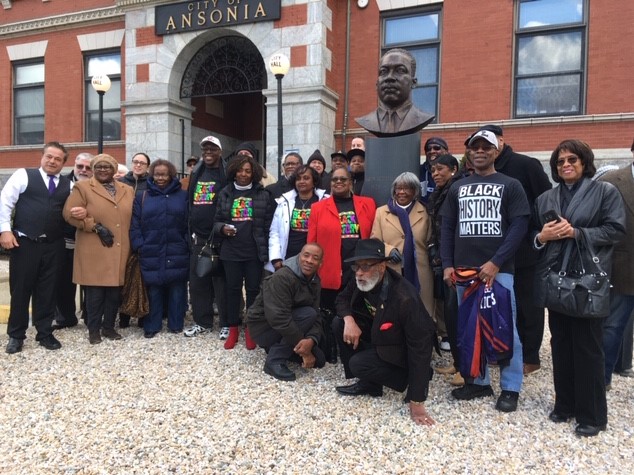 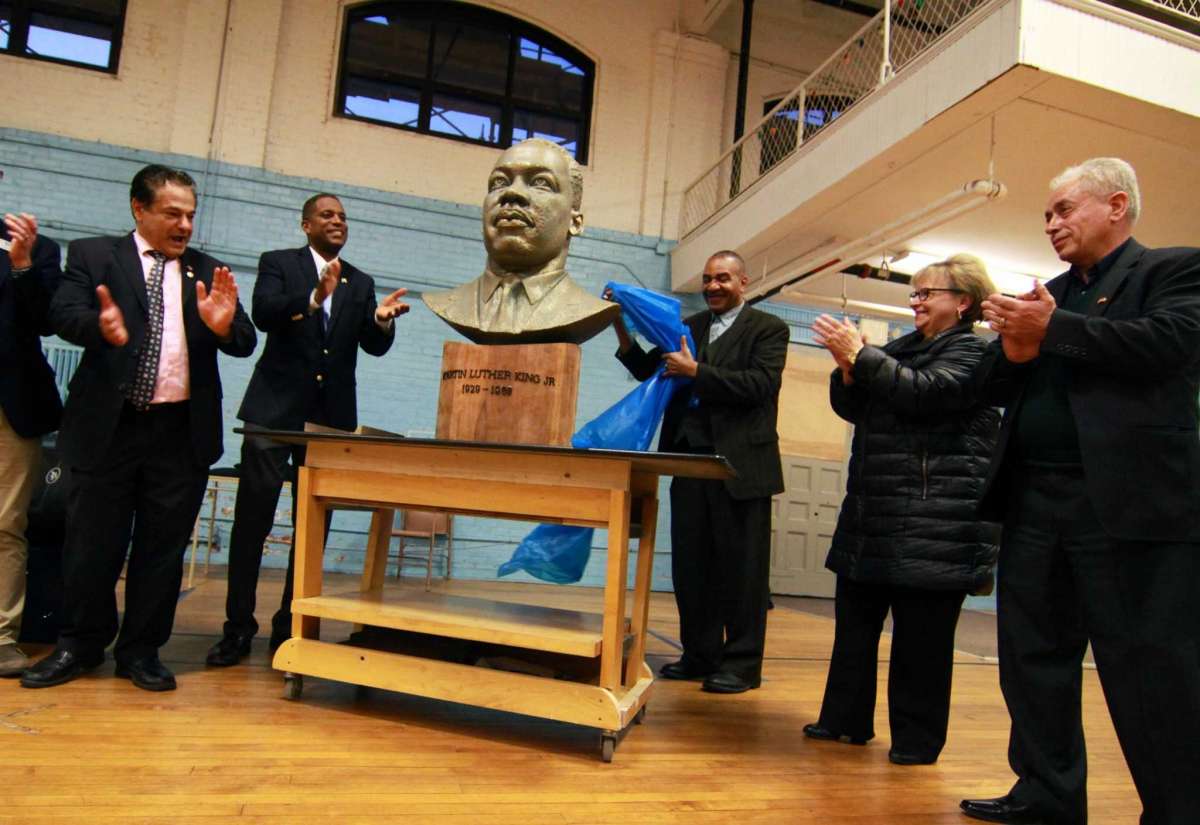 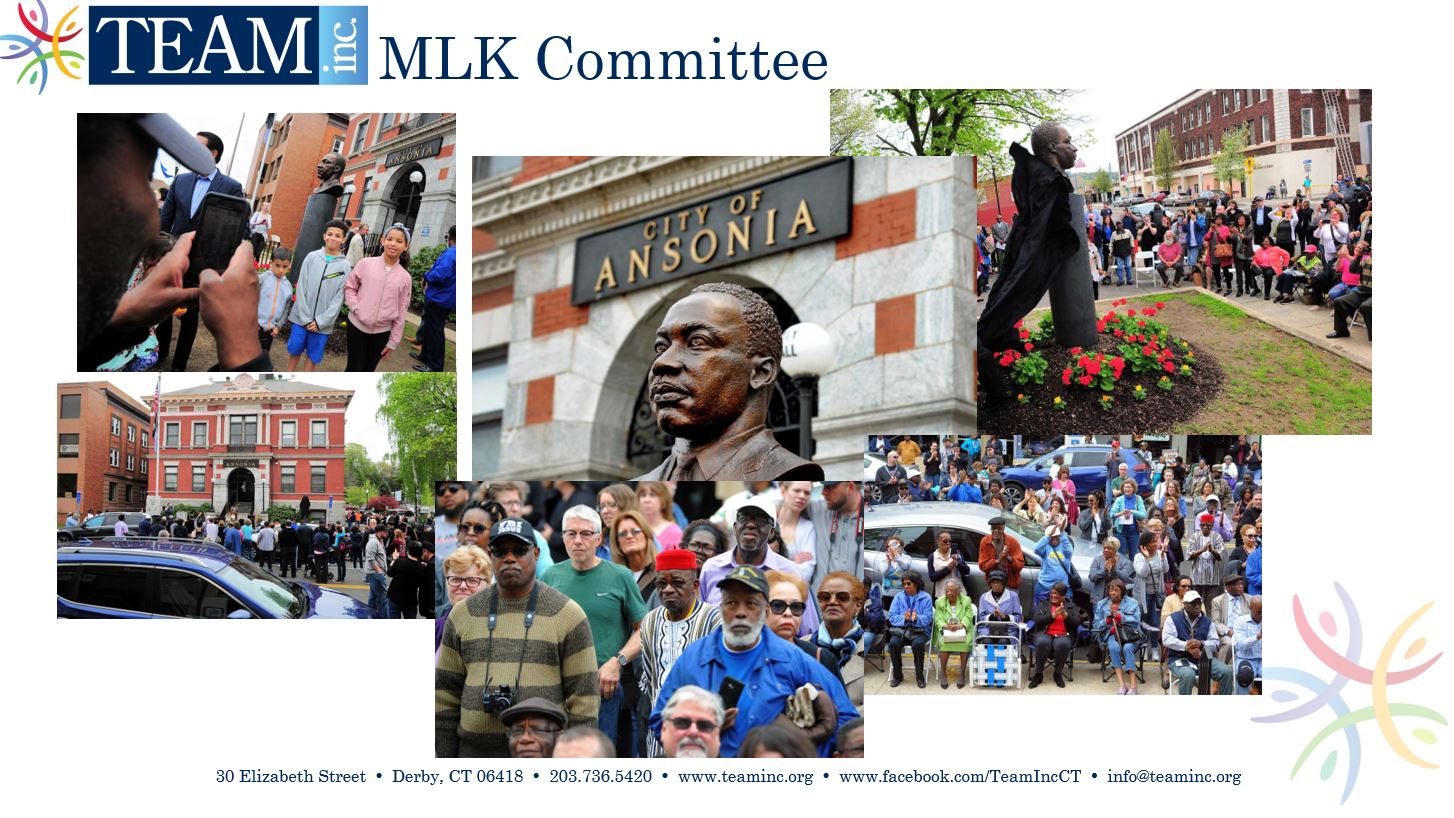 Throughout Martin Luther King Jr’s life, he preached the importance of equality and unity, saying in a 1965 speech: “We must all learn to live together as brothers, or perish together as fools.”

Locally, King’s legacy lives on through The Valley Martin Luther King Unity in the Community Committee. Despite being over 50 years since King’s death, the committee’s mission is to promote equity and equality in all Naugatuck River Valley towns, emphasizing the importance of a unified people.

“Without unity, we don’t have anything,” said Ulysses Youngblood, a pastor in Ansonia and chair of the committee, “because divided we fall, but when we’re united, we can accomplish a whole lot.”

The committee, formed in 2018, is partnered with TEAM Inc. in Derby, Conn., a nonprofit organization whose mission is “to strengthen our community by educating, supporting and empowering individuals and families.”

Originally, the committee was known as The Valley MLK Bust Committee, which raised money to install a sculpture of King in Ansonia. In May 2019, the bust was unveiled in front of Ansonia City Hall, accomplishing the committee’s initial mission. According to the Connecticut Post, the bust is just the second of King in Connecticut, the first located in New Britain.

“When people spoke and talked about what they would like to see in terms of seeing Dr. King’s vision come to fruition, there was a young boy – a young white boy – who stated in the meeting that we wanted to see a Dr. King bust or statue somewhere in The Valley area,” said Alfred Smith, a committee member, and pastor at Macedonia Baptist Church in Ansonia.

“And so a group of ministers including myself, we got together, and we met for over three years; raising funds, community involvement, and now the result of all that work, a collaborative and cooperative venture, is the fact that only the second bust of the Rev. Dr. Martin Luther King Jr. stands right next to City Hall.”

The committee then needed a new objective, setting a long-term goal to make a difference in the community and bring people together. In early September 2020, the committee adopted its current name, further publicizing its new mission.

“What we’re basically trying to say is that [unity in the community] is self-explanatory,” Youngblood said. “We hope that the clergy, the elected officials, the community, will come together as a whole to bring unity in the community through dialogues and open discussions so that we can discuss some of the issues that are present and hopefully get them resolved, and to be more effective in our community.”

The committee’s message and importance have shown given the incidents of racial injustice across the country. In 2020, the deaths of George Floyd and Breonna Taylor, among several others, sparked outrage and protests nationwide.

One committee member is Ansonia Police Chief Andrew Cota, who after the killing of Floyd in Minneapolis, Minn., wrote a statement to Ansonia citizens via social media, with the city’s large African American population in mind. According to the World Population Review in October 2020, African Americans make up just under 15 percent of Ansonia’s population.

According to The New Haven Register, Cota said in the statement: “I say to all of you, without a doubt, that this is not what the men and women of the Ansonia Police Department stand for or represent. We denounce these actions.”

Ansonia currently has numerous officers within the department that are members or involved in the committee, bringing a focus on community policing. For Cota, an advantage of the committee’s message he said is because it comes from different demographics.

“It’s not just one voice speaking – it’s multiple voices,” said Cota. “At this point, we’ve had the police department, we’ve had the superintendent of schools, we have pastors and reverends from churches throughout The Valley. That shows that we’re committed to it – it’s not just one piece, one person answering all the questions – that we’re looking for a Valley-wide, especially for us an Ansonia-wide, community conversation to sort through these issues and hopefully allow people to talk about things.”

For the committee, there is still far more to accomplish than just the bust. However, the initiative being made now is about spreading a positive message of unity throughout The Valley.

“What we really want to inspire people with is change,” said David Morgan, CEO of TEAM Inc. “Change that influences our behaviors, actions and policies, that ensure equity and opportunity for all in all works of life.”

Eligibility is based on household size and gross annual income, or categorical eligibility.

Families or individuals with a gross annual income at or below 60% of the State Median Income (SMI).

Categorical eligibility has been expanded for households:

The Liquid Assets Test, as well as Risk Assessments for Safety Net Benefits, have been suspended for the remainder of the CEAP program year.

Applications are currently being accepted for the 2022-2023 heating season

Email us at energy@teaminc.org to learn more about the program and apply.

To fill out the application online, press HERE. This will redirect you to the ct.gov/DSS website.

Please Note: you must disable your pop-up blocker to download the application.

After filling it in, you must print it out to mail, fax, or drop it off OR download it and send it by email to energy@teaminc.org.

The weatherization Assistance Program provides comprehensive weatherproofing to the households of eligible clients to make their homes more cost effective, and reduce their heating costs. CEAP clients are eligible for the Weatherization Program. This program is administered through New Opportunities, Inc.

For more information or to request an application, call the New Opportunity Inc. (NOI) Weatherization Department at (203) 575-4328 or email WX@NewOppInc.org. Please include your name, address, and phone to ensure accurate information is sent to you.

Operation Fuel is a private, non-profit statewide program designed to provide one-time emergency energy assistance to those households who are in crisis and whose income is at or below 75% of the State Median Income (SMI). If you do not qualify for CEAP, you may still qualify for help from Operation Fuel. 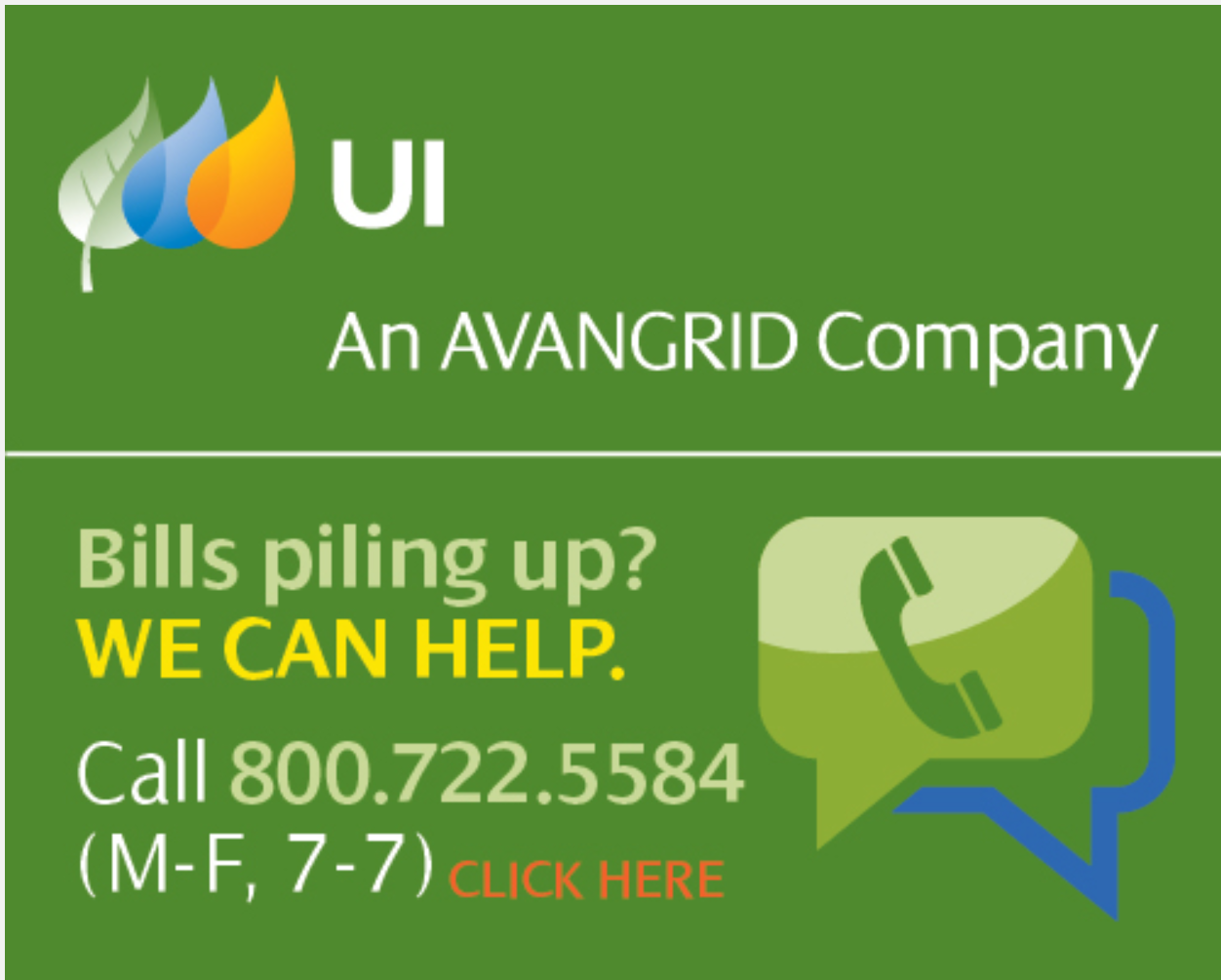